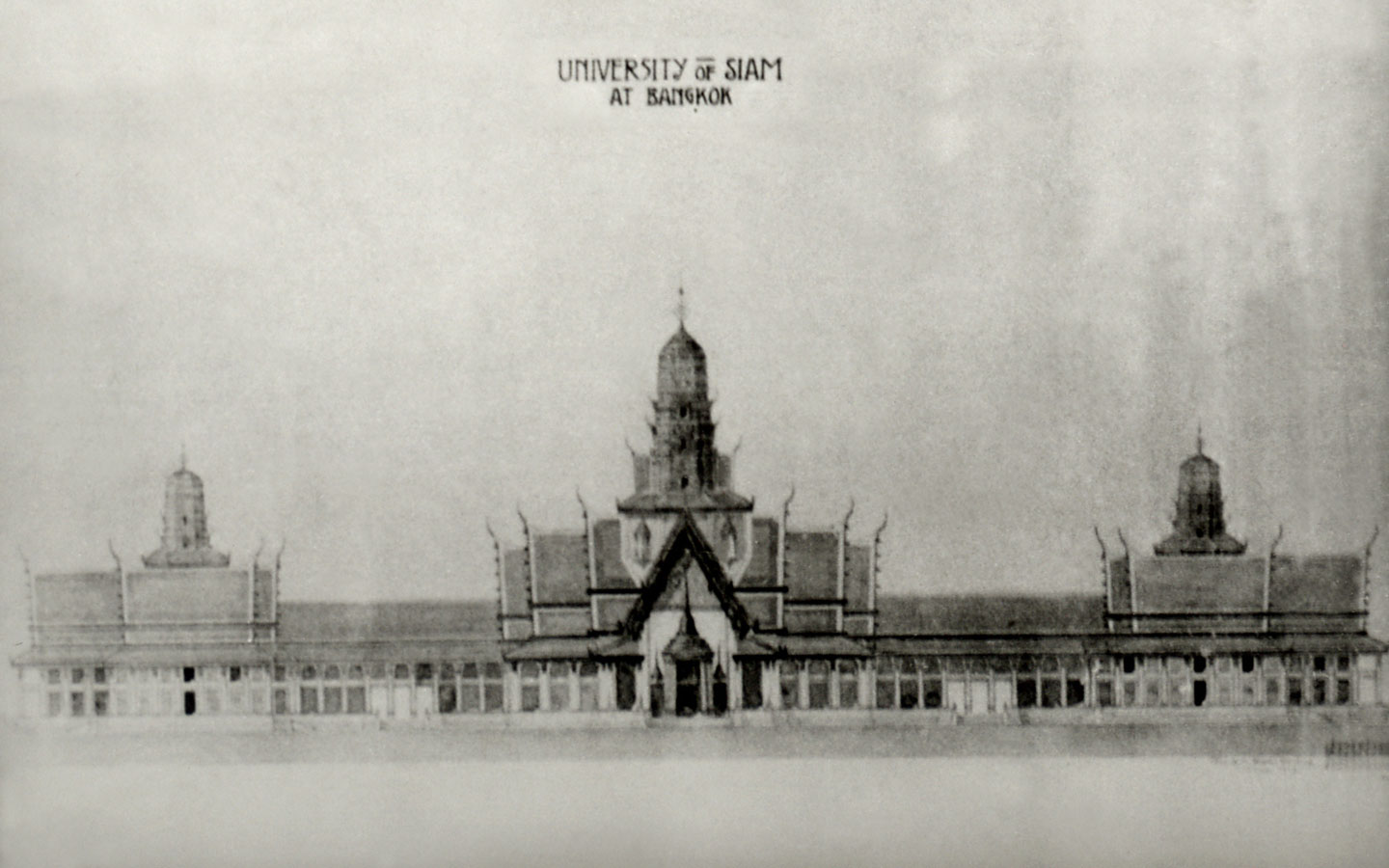 Founded in March 1917, Chulalongkorn University is Thailand’s first institution of higher learning. The groundwork and preparation for the university’s establishment, however, took place almost half a century earlier. The worldwide economic, social and political changes in the late nineteenth century compelled Siam, as Thailand was officially called until 1939, to adapt in order to avoid Western colonization. King Chulalongkorn (Rama V) introduced a royal policy to strengthen and improve the government so that  the country could successfully resist the tides of colonialism. One of the major parts of this policy was to improve the Siamese educational system to produce capable personnel to work in both the public and private sectors. To this end, a school was founded in 1871 at the Royal Pages Barracks within the Grand Palace compound. Then, in 1882, King Chulalongkorn upgraded the school and gave it the name “Suankularb”. In the same year, the King also established other schools, including the Army Cadet School, the Cartographic School, the School for Princes and the School for Dhamma Studies.

All of our subjects, from our royal children down to the lowest commoners, will have the same opportunity to study – be they royals, nobles or commoners.

This quote, taken from King Chulalongkorn’s royal speech to members of the royal family and civil servants, is confirmation of His Majesty’s belief in equal educational opportunity. The King granted the policy to set up schools throughout the kingdom, together with institutions of higher learning, and declared, “…education in our country must have the highest priority, which I am determined to develop.”

In 1899, Prince Damrong Rajanupab, a younger brother of King Chulalongkorn and the Minister of Interior at the time, submitted a proposal to establish the Civil Service Training School, with Phraya Wisutsuriyasak (M.R. Pia Malakul — who later assumed the title of Chao Phraya Phrasadej Surendradhibodi) as the principal. However, since the students had to work as royal page trainees in their third year of study before graduation, the name of the school was changed to the Royal Pages School in 1902. The Royal Pages School progressed steadily and produced an increasing number of graduates for the government each year. Recalling the original intention of his late father, King Chulalongkorn, to establish an institution of higher learning, King Vajiravudh (Rama VI) ordered that the Royal Pages School be elevated into an institution of higher education and named it The Civil Service College of King Chulalongkorn on January 1, 1911. In the beginning, the course of study focused on government. Eventually, the curriculum expanded to meet the needs of the kingdom and  included more disciplines, such as law, international relations, commerce, agriculture, engineering, medicine and teacher education.

The Civil Service College then used proceeds donated by members of the royal family, government officials and ordinary citizens to commission a statue of King Chulalongkorn the Great. Once completed, about 800,000 baht of the collected funds remained in the Royal Treasury Ministry. With interest, the sum accumulated  and King Vajiravudh then gave it to the college, to be used as the original capital. Furthermore, he graciously donated the palace of his brother, the late Crown Prince Vajirunhis, as the site of the college and gave around 520 acres of the King’s private land adjacent to the palace for the college’s future expansion. Soon after, the Administration Building was constructed as the college’s first building in January 1915.

After several years of operation, King Vajiravudh knew that the Civil Service College was now ready for its next transformation.  On March 26, 1917, His Majesty declared that the college become Chulalongkorn University, in memory of his father. The newly founded university was under the supervision of the University Affairs Department, Ministry of Education, and Phraya Anukijwithoon was the first principal (the title was changed to Rector in 1935). There was a University Council, which was responsible for policy making, planning and advising on the affairs of the university. Prince Damrong Rajanupab was the Chairman of the Council, and the principal of the university was the Secretary.

When it was first founded, the university had 380 students, four faculties, and two campuses. The Faculty of Medicine was located at Siriraj Hospital, the Faculties of Public Administration and Engineering were housed in the Administration Building, and the Faculty of Arts and Science was in Prince Vajirunhis’ palace in Patumwan district. The Law School was under the responsibility of the Ministry of Justice until the university was ready to take over, and the Teachers’ Training School was handed over to the Ministry of Education.

In 1923, the university accepted high school graduates to study in the Faculty of Medicine and received support from the Rockefeller Foundation to organize a Bachelor’s degree program in medicine. Five years later, the first group of 18 graduates completed their studies and were awarded the first medical degrees in the kingdom.

By 1929, the Faculty of Public Administration became the Faculty of Law and Political Science. In 1933, a year after the establishment of the constitutional monarchy, the government transferred the faculty to Thammasat University, which was established in 1934. From 1934 to 1958, the university focused on the improvement of undergraduate education; thus, more faculties were established. In 1961, the university established the Graduate School followed by numerous research centers and institutes.

The history of Chulalongkorn University is one of transformation and development. This has not changed. Over the century, the university has continuously worked for excellence in education and research, befitting itself to the name of a beloved monarch, King Chulalongkorn the Great.